Home Latest 5 Most Beautiful, Heavenly Waterfalls To Visit In India 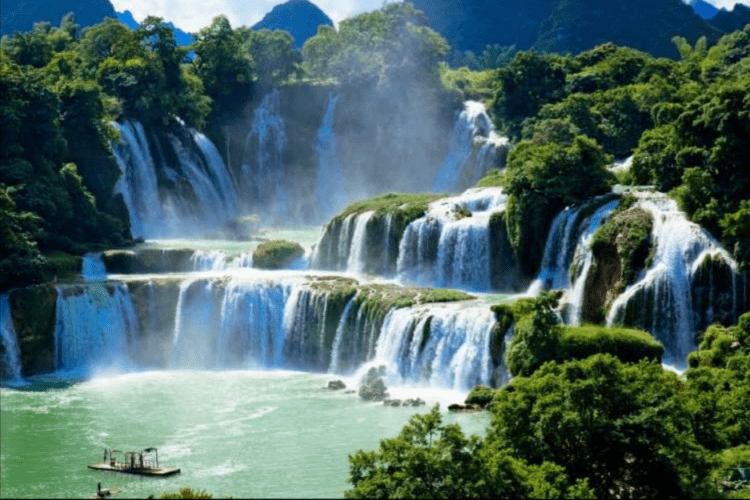 Waterfalls are always a sight to behold the soul within nature. The sound of the splashing water and the greenery usually surrounding the nearby area always refreshes the living body. India being the land gifted with immense natural beauty has plenty of waterfalls.

All waterfalls look lovely, but some are just as incredible as its scenery. Get to know about five such waterfalls in India.

This is the most incredible and beautiful waterfall in India. Jog Falls is one of the highest waterfalls in the country. It is situated in the Shimoga district and lies on the Sharavathi River. It comes down in a segmented form, combining four falls: Raja, Rani, Rover, and Rocket. The waterfall starts falling from a height of about 830 feet. You have to trek to reach this fall but its all worth it. It is usually forbidden to walk down the trekking path in monsoon because it can be slippery. Therefore, summers and winters are the best time to visit Jog Falls.

Nohkalikai Falls is the tallest plunging waterfall in India. Falling from a large height of 1100 m, Nohkalikai Falls is spectacular. It is a known fact that the North-Eastern states have a pleasant climate throughout the year with monsoon showers prevalent annually. Meghalaya literally translates to the abode of clouds. The sheer beauty of this state will amaze everyone, and this waterfall acts as the icing on the cake. The Nohkalikai Falls is surrounded by dense vegetation forest. Below the waterfalls, a small pond is formed that has an unusual green color.

The North-Eastern states have no shortage of scenic beauty. Also, these states aren’t as developed as other North Indian states, and therefore, most of these natural gems remain untouched by human hands. Jang Falls, also known as Nuranang Falls, is one such gem. This waterfall is located in Tawang, the source of power for the nearby village/town. To reach there will have to trek a little but once you do, the view is equally rewarding. With a small bamboo bridge and huge rocks to sit upon, you can just sit and admire this creation of nature.

Coorg is easily the most beautiful city in Karnataka. With round hills, pleasant climate and diverse flora and fauna, Coorg is also a favored hill station by many. Adding to the existing charm of Coorg is this lovely waterfall named Iruppu Falls. It is located in the Brahmagiri district and also borders with the adjoining state of Kerala. This waterfall is also significant because one of Cauvery River’s tributaries begins from this fall. It is also a famous pilgrimage site because of the Shiva Temple nearby. During the occasion of Shivratri, a large number of devotees visit this temple. It is believed that after Sita was abducted, Lord Ram and his brother Laxman reached here while searching for her. When Lord Ram got thirsty, Laxman shot an arrow at the Brahmagiri Range out of which this waterfall originated. Thus, people believe that the holy water of Iruppu Falls can wash away all sins.

Located in the Thrissur district of Kerala, the Athirappilly Waterfall is known as the Niagara Falls of India. This waterfall may not have a height like the ones mentioned above in the list, but that doesn’t mean that it’s not beautiful. At the height of 80 m, it is the largest waterfall in Kerala and an ideal weekend destination if you’re in the state. The specialty of the area surrounding the waterfalls is that in the dense vegetation around, a large number of endemic species of flora and fauna exist. There are also endangered animals like the Asiatic elephant in this region. Thus, daily jungle safari is organized nearby by the government.