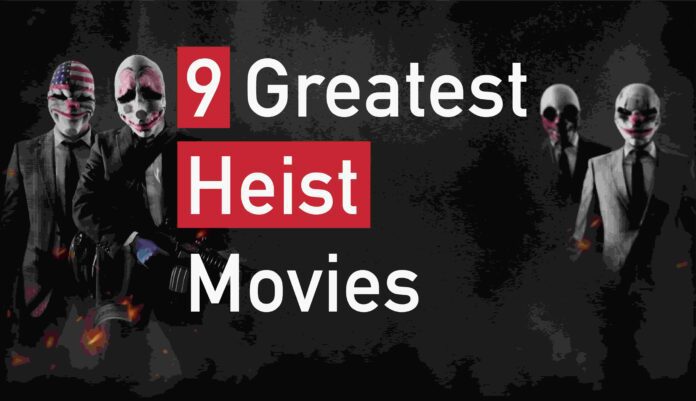 People found heist movies so fascinating. I wonder Heist’s are the most difficult things. If you analyze, first of all, it needs perfect and full proof planning, secondly so many skills and intelligence to do a perfect heist. That’s why the audience who likes to watch a master-planned action with insane intelligence movie experience, more prefers heist movies. Here is a list of the top greatest heist hollywood movies beyond imagination which by watching, you will be impressed for sure.

Ben Stiller and Eddie Murphy lead star cast in Tower Heist, a comedy caper about working stiffs who seek revenge on the Wall Street swindler who stiffed them. After the workers at a luxury Central Park condominium discover the penthouse billionaire has stolen their retirement, they plot the ultimate revenge: a heist to reclaim what he took from them. Queens native Josh Kovacs (Stiller) has managed one of the most luxurious and well-secured residences in New York City for more than a decade. Under his watchful eye, nothing goes undetected. In the swankiest unit atop Josh’s building, Wall Street titan Arthur Shaw (Alan Alda) is under house arrest after being caught stealing two billion from his investors.

When their attempt to infiltrate an international drug cartel goes haywire, DEA agent Bobby Trench (Denzel Washington) and U.S. naval intelligence officer Michael Stigman (Mark Wahlberg) are suddenly disavowed by their superiors. Now that everyone wants them in jail or in the ground, the only person they can count on is the other. Unfortunately for their pursuers, when good guys spend years pretending to be bad, they pick up a few tricks along the way.

In the early 1960s, at the height of the Cold War, THE MAN FROM U.N.C.L.E. centers on CIA agent Solo and KGB agent Kuryakin. Forced to put aside longstanding hostilities. The two teams up on a joint mission to stop a mysterious international criminal organization, which is bent on destabilizing the fragile balance of power through the proliferation of nuclear weapons and technology. The duo’s only lead is the daughter of a vanished German scientist. The key to infiltrating the criminal organization, and they must race against time to find him and prevent a worldwide catastrophe.

Sam, an ex-US intelligence officer, hires a band of Japanese mercenaries to retrieve a mysterious suitcase that is about to fall into the hands of the Russians. An Irish liaison assembles a squad of mercenaries, or ronin, charged with the thorny task of recovering the case. But the team, led by an ex-CIA agent, mistrusts one another.

A young FBI agent, Johnny Utah (Luke Bracey), infiltrates a cunning team of thrill-seeking elite athletes – led by the charismatic Bodhi (Edgar Ramirez). The athletes are suspected of carrying out a spate of crimes in extremely unusual ways. Deep undercover, and with his life in imminent danger, Utah strives to prove they are the architects of this string of inconceivable crimes.

It is the story of a tough cop, Detective Frazier, who matches wits with a clever bank robber. As the dangerous cat-and-mouse game unfolds, a wild card emerges Madaline, a power broker with a hidden agenda, who injects even more instability into an already volatile situation. The mastermind behind a bank robbery in Manhattan has planned the heist in great detail. A detective tries to negotiate with him, but the involvement of a broker worsens the situation further.

A talented, young getaway driver relies on the beat of his personal soundtrack to be the best in the game. When he meets the girl of his dreams, Baby sees a chance to ditch his criminal life and make a clean getaway. After being coerced into working for a crime boss. He must face the music when a doomed heist threatens his life, love, and freedom. Doc forces Baby, a former getaway driver, to partake in a heist, threatening to hurt his girlfriend if he refuses. But the plan goes awry when their arms dealers turn out to be undercover officers.

Danny Ocean, a gangster, assembles a group of eleven people in an effort to steal money from three popular casinos in Las Vegas owned by his rival, Terry Benedict. Danny Ocean and his gang map out the casino and find a way to get down into the vault. Terry Benedict to state the terms. A large reason for the heist was that Benedict was going out with Danny’s sexy ex-wife Tess and he wanted her back. The key to Danny and Linus getting into the vault was a device that Basher stole, a bomb powerful enough to wipe out the power of Las Vegas.

Regarding Centuries, Mankind has been grown and faced so many ups and downs. We know them as reading history or just as an image. There are so many things to learn and pursue in real life. Some of them are legends and some become our inspirations. Taking those inspiring stories some great directors have made some iconic Hollywood biopic movies for us. Watching biopics makes a person believe in his hard work, knowledge, patient, and God. Taking life’s logic and method can help you succeed in life. Here are some of the Best biopic movies listed which you must not miss watching.

Entrepreneurship is something a person chooses to be one. If you are an entrepreneur or a normal man with an interest, we can suggest to you some Hollywood movies that will teach you a lot. About the marketing skill, ideas to execute and to the right and strong decision at right time. 10 Best Movies Made for Entrepreneurs | Must Watch.

While watching a movie we all expect something different to experience, and an unexpected storyline. Time Traveling is still quite a strange thing for all of us. All we can do is just imagine it in our own way of thoughts. Many great Hollywood directors have also made some Hollywood movies that are beyond imagination in time traveling. If you like to experience these time travel movies, here is a list of the top best Hollywood movies based on time travel.