Home Latest All u need to know about Bhangarh: haunted fort 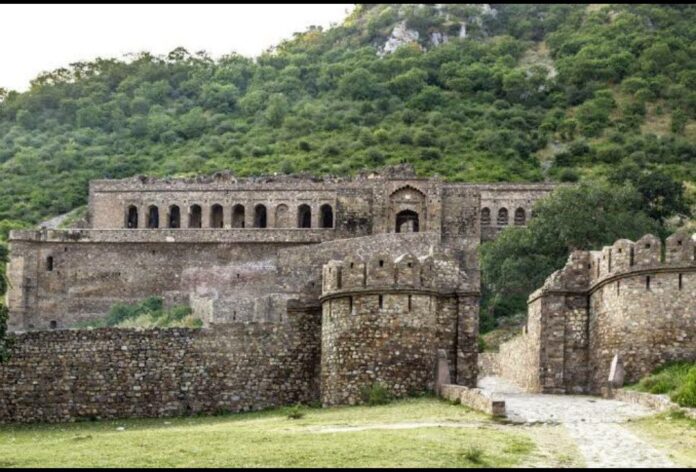 Bhangarh one of the most haunted place in dia which is situated in Rajgarh Alwar, Rajasthan state of India. Entry into Bhangarh is restricted after sunset. Bhangarh fort’s haunted stories are bone-chilling yet fascinating all at the same time. Now, it is the haunted tourism attraction in India. Numerous ghostly experiences and happenings in the fort premises, villages have sprung up far away from the fort, due to the fear of what lies within. Even the Archaeological Survey of India or the ASI has forbidden the locals and tourists from entering the fort at night. This completely ruined, haunted fort of Bhangarh does have a very eerie, negative aura to it. Several legends have attested to the paranormal happenings inside the fort.

The Bhangarh Fort was constructed in 1573 AD by Raja Bhagwant Das, the ruler of Amber from Kachwaha. His elder brother Man Singh was a well-reputed general under Emperor Akbar and known as one of Akbar’s Navratnas. Bhagwant Das built the Bhangarh Fort for his son Madho Singh. Madho Singh fought in many wars besides his father and uncle. After his demise, his son Chatr Singh became the next ruler. The kingdom declined following the violent death of Chatr Singh. The famine of 1783 caused the town to become deserted, and it fell to ruins. Then came the legends which survive till today and provide an otherworldly atmosphere.

Two stories behind the haunted fort

King Madho Singh had to request permission from an ascetic named Balu Nath to expand the periphery of the fort. Balu Nath lived in a nearby cave. The sadhu made the king promise that the shadows of the fortress would never disturb his meditation or touch his cave. Madho Singh tried to follow this dictum, but it was not to be so. As the sun shifted south in winter, the shadows grew longer and touched Balu Nath’s cave. Woken from his deep meditation, the tantric issued a curse that the town and its people would never be able to put up another roof in the vicinity. Even today if there is new construction the roof collapses.

The other story speaks of the gorgeous princess Ratnavati of Bhangarh, the daughter of Chatr Singh. Her beauty was said to be unparalleled throughout the land. She was well liked but had a stepbrother Ajab Singh who was much hated due to his evil temperament. The story of her beauty had spread far and wide, and she had the attention of many wealthy and powerful suitors. Near the fort lived a tantric named Singhia, a man well versed in the black arts, who fell deeply in love with Ratnavati. He knew in his heart that the princess would never be attracted to him and tried many times in vain to cast a magical spell over her. One day he came upon Ratnavati’s maid buying perfume at the village. He cast his spell on the scent so that if she used it, she would fall in love with him. Ratnavati came to know of this and was furious. In her anger, she threw the bottle out of her window, and it struck the tantric (another popular version is that she threw it on a boulder which rolled and subsequently crushed the tantric). He died due to the injury, but before his death, he cursed Chatr Singh’s family and the local inhabitants. The following year Ratnavati was killed along with other inhabitants when the fort was attacked by invading Mughals.

Folklore says that the soul of the tantric still searches for Ratnavati in the ruins at night.