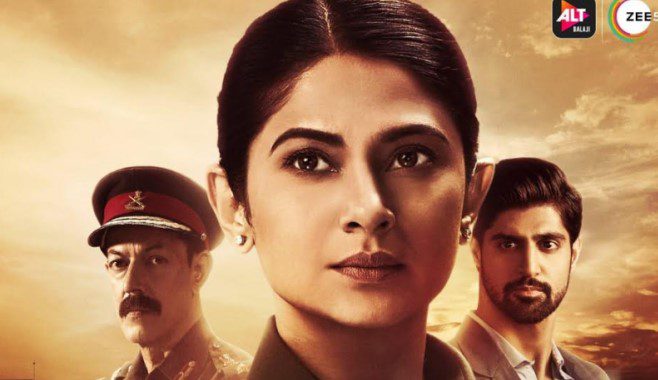 Code M is the Tv Show released in the early month of 2020. Code M is created and produced by Alt Balaji and Zee5. This series features Jennifer Winget and Tanuj Virwani as a lead character. These series consist total of 8 episodes and all are available at ALT Balaji. Code M gather lots of attention because of its storyline and the execution of the story. Code M has got a rating of 8.2/10 in IMDb which is pretty.

The story starts with an encounter of terrorists near the border of Rajasthan, the encounter was done by the Indian Army. After the encounter, the local people start protesting for the fake encounter held by the Indian army, and innocents were killed. During the protest the mother of the two boys who were killed in the encounter attempted suicide in front of Amry base to prove that her child is not terrorist that was a fake encounter, after her attempt, the media took lots of attention and threw questions to the Indian Army. So due to all these, the army officers have to put the leading officers in the investigation room and in that time Major Monical Mehra(Jennifer Winget) introduced as an investigation officer.

So during his investigation, Monica found the officers were hiding something and she is unable to find that clue, many civilians tried to help her but still she is lacking something. So during the investigation of Monica, a lawyer was appointed form the opposite side, and that lawyer was Monica’s ex-boyfriend.

So this will be not good to give all the spoilers here, So when they meet they started working together they have to face different problem but in the end, they find all the clues and keys to find the truth. Likewise every web series this also has a game-changing moment in the last episode. So, in the end, something will happen which is not expected by you.

After watching all the episodes of Code M the review is fantastic, when you gonna watch this web series you may don’t like the 1st episode but continue you will find interesting after the second episode. The story of the series is fantastic, all the characters are up to their mark. Somewhere you will expect Major Monica to be more aggressive but it is totally fine after watching her in the web series. The motive of the series is pretty good, to aware people of the same gender and many more.

The good thing about the series is it only consists of 8 episodes which you can easily finish down. The game-changing moment of the series is the last episode where you can find the real truth and culprit. Apart from all these the action scenes the dialogues and the love chemistry shown are awesome. it may possible you feel that the background music can be made better. That’s all for this article, this web series is awesome to watch. Happy Watching.