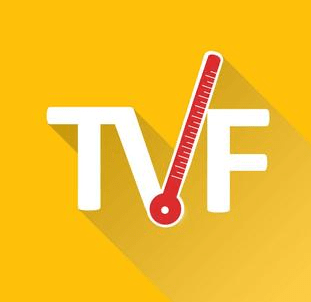 The Viral Fever (TVF) is popularly known as TVF. TVF is an Indian OTT platform along with a net worth of $20 million and the founder of TVF is Arunabh Kumar. Arunabh is a pass out student of IIT Kharagpur. Arunabh Kumar (Founder), Vijay Koshi (President), and Ronit Agarwal (Talent Cast) played an important part in the success of TVF. In 2020 TVF had decided to distribute the streaming of subject on other platforms like MX Player and Sony Liv. The TVF had also evolved its app which is known as TVF Play. The TVF Play had created some associates:-

This subsidiary is found is Youtube with different channel names however all the content of these subsidiaries is found on the TVF Play. So here is the list of Top 15 TVF best webseries that everyone should watch.

Flames web series is quite relatable to our real life. Some scenes of this series are so genuine that it gives a smile on your face and reminds you of school days. This series is a sentimental high school romantic drama full of purity and simplicity. Flames web series was released on the TVF subsidiary channel ‘Timeliners’. This web series showed the relations of friendship and relationship between a teenager and their parents.

Panchayat web series is extraordinary in every way. This series exactly showed the story of a middle-grade engineering student. This series occupied the life story of Indian Village which is portrayed too beautifully. Panchayat series rotated throughout the life of Abhisekh Tripathi who got a job as a secretary in a village in Uttar Pradesh. The story of the series showed the village life in the eyes of Abhisekh. Not a single portion of this series will be boring.

Mr and Mrs is a comedy web series of a married life couple. This series deals with the common obstacles of married life with an angry wife who gives the cringe silent treatment to her husband for a shame which he doesn’t know. The series is light-hearted and quite refreshing and this series brings one into a good mood even if when one is yelling out of anger.

This series showed the actual challenges which are faced by young married couples in this modern India. Mr. and Mrs. series showed how a couple changed a house into a sweet home with their special bond. If you are willing to watch this series visit TVFPlay.

Gullak web series Gullak means piggy bank. This series showed a story of a middle-class family. The series captures 5 episodes and it is set in a small town in Uttar Pradesh. Gullak series doesn’t have any type of gun or crime-related scenes. It has an adoring and sarcastic mom, a forgiving father, an elder child who is worried about the future of the family, and a younger child who is happy in his own life. The acting and the parts of the gossips are awkward and funny.

Kota factory is a story that is set up in Kota. Kota factory showed the real side of Kota. This series showed the journey of the IIT JEE aspirants in Kota. Jeetu Bhaiya (Jitendra Kumar) played the role very well of a physics teacher and he knows exactly what his students want. The students see Jeetu Bhaiya as their motivator, guide, mentor, and colleague.

In this series, there is a perfect amount of humor and a large amount of talent. This series showed that IIT is not everybody’s cup of tea and it showed every person is extraordinary in their way. Watch this series at TVFPlay.

Yeh Meri Family web series is all about a family drama. This series is filled with sweetness and evergreen scenes that are related to our daily lives. The whole family members of this series had given a perfect performance like everything seems real. The series tells us about the importance of family and reminds us about our childhood memories.

The dialogues of the series are composed so accurately that you will not realize like you are watching a series. I just want to say that start binge-watching this series and recall your memories and start smiling throughout the series.

TVF Bachelors is one of the most famous web series on TVF.  In this series, there is a group of four bachelors who deals with problems like cooking and finding jobs. The series contains some jokes and funny scenes and this series contains a total of 10 episodes. The actors have performed very well they did an excellent job. The writers of this series had done the best job with incredible catchy dialogues and excellent acting. If you are interested to watch this series visit TVFPlay.

College Romance web series is full of comedy, romance, and drama. College romance series reveals the college life romance. This is best adequate for college life students which portrays the story of every college student. This web series is full of love, friendship, and emotions of college life. So if you are having the mood to watch a comedy as well as romantic series you can give a watch to college romance series you won’t regret watching it. Watch this series at TVFPlay.

TVF Pitchers web series is full of comedy. This series had four friends Naveen, Jitu, Yogi, and Mandal. The four colleagues have high-paying jobs but they are not happy with their job as their dream is to start their own company. All the characters of the series seem real because of their excellent work.

The idea to start their own company comes into the mind of Naveen. Mandal played an important role in this series as he connects the group. This series is brilliantly composed and supervised. Each episode of this series is about 40 engaging minutes.

Engineering Girls is a web series which is published by ‘Timeliners’ it is the subsidiary of TVF. It showed the lead actresses Maggu (Barkha Singh), Sabu (Kritika Avasthi), and Kiara (Sejal Kumar). This series showed the life of three engineering girls in their hostel and the misfortune of engineering college.

This series showed the dreams of girls of starting their own company and finding love. Engineering girls is the fresh take on the engineering hostel experience. The series was shooted at Sharda University.

Aspirants series revolved in their past and present lives. Therefore this series taught us how to handle our personal life and goals simultaneously. Aspirant showed the struggle of becoming an IAS officer. In this series, Sandeep Bhaiya is one of the finest characters as he gave many life lessons. If you are willing to watch this series visit Youtube and all episodes are available here.

Cubicles web series is about the life of an IT sector job. It is the story of a young and inspired engineer, who had recently graduated and had been selected for a job. This series showed the mangers dilemma, fresher’s anxiety, and computer programming (reconfiguration, access, dined, etc.). Abhisekh Chauhan (PP) did a fabulous job his dialogue delivery is very good. Cubicles series is available in TVFPlay.

Girls hostel web series is about girls hostel life. This series consists of four girls Richa (Ahsaas Channa), Milli (Simran Natekar), Jo ( Srishti Srivastava), and Zahira (Parul Gulati) with four different backgrounds and they became implausible friends at SVM Dental College Girls Hostel. Jo, she was the senior and hostel don, she lives her life by her rules. And Zahira always thinks she is above all.

The series is divided into five parts with 20-35 minutes each episode. This series is quite interesting and binge-watching, the tagline of the series is ‘why can’t girls have fun?’. This series consists of lots of comedy scenes and funny dialogues.

The writing, narration, direction, screenplay, and acting are amazing and it realizes like a fresh wind. Thus it will surely compel you to fall in love with its fabulous acting and amazing creativity.

The Aam Aadmi Family web series is about the story of a Punjabi Family fixed in west Delhi. It is the most wonderful series to watch. It is excellently portrayed with stomach aching laughter and surprising tears ending. The series showed that how a daughter in law played a role of a daughter to aging women

This series is a happy, emotional, loving, and funny series. The series will perfectly give you an Aam Aadmi Family vibe. If you love to watch family types web series I would highly recommend watching this series. Watch this series at TVFPlay.

The Viral Fever (TVF) has the most amazing and unique ideas for presenting. It is the explorer of youth-based web series in India. If anyone cannot find something good to watch on television or other media platforms they can just search the TVF channel on Youtube and start binge-watching the series. So here is the list of the 15 best TVF web series which are worth watching. And if you are willing to watch more Indian web series then visit 45+ Indian Web series You Must Watch.